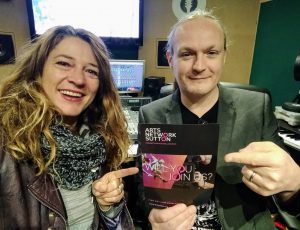 We are lucky to have several niche venues and a great many bars, pubs and community venues hosting Live Music & Open Mics on a regular basis in the Borough. Recently, Cryer Arts has re-opened in the revamped Cryer Theatre in Carshalton, and The Sound Lounge live music venue is due to open on Sutton High Street, in May 2020, plus we have numerous community festivals which regularly feature local grassroots artists, like the Wallington Music Festival. Arts Network Sutton are happy to have funded a variety of music projects with our small grants, and it’s great to have a mix of musically-minded individuals and groups in our directory.

One of those individuals is Wallington-based, Andy Brook, who has supported the local music and arts scene since 2013, when with his wife, Thea, they opened the doors to The Brook, a converted tyre garage, hosting a cafe, recording studio and music venue. In addition to producing and hosting Open Mic nights, he set up The Brook Choir in 2014, has been an integral part of the Wallington Music Festival since its inception in 2015, and was previously a tutor on the Music Technology course at Carshalton College.

Andy has 20 years experience having produced, engineered and toured with the likes of Status Quo, Bonnie Tyler, Ginger Wildheart, Uriah Heep, Francis Rossi, Mel Gaynor, Greg Jackman, Del-Amitri, Travis, Tiger Lilies, Towers of London, Hayseed Dixie, Million Dead, Breed 77 as well as Universal, Sony & WMG. He is also involved in film and tv, location and media post production and is a registered member of PRS, APRS, PPL, MU and the MPG as well as being a full voting member of the Brit Academy (and Arts Network Sutton!)

Our Partnership & Engagement officer, Samia, caught up for a quick chat with Andy in his studio recently….

ST: The local music scene – should we be excited?

ST: Right now, who are your local ‘ones to watch’?

ST: Genres of music are so diverse – what do you produce mostly?

AB: I produce a variety – from acoustic, to urban, rock, metal, punk, pop, singer/songwriter, hip hop. Being able to adapt to suit the style of the artist/s is key – the psychology changes, songs are personal, so I approach each project on a case by case basis.

ST: Who have you worked with recently?

AB: Status Quo, I recorded their latest album, Backbone, which went straight in at #6 on the official chart, also Bonnie Tyler, and local bands Eltel, Chloe Ray and many more.

ST: Accolades you care to mention?

AB: A top 10 record under my belt, nominated for several awards alongside top names in the industry and our band, Rich Ragany & the Digressions, are supporting rock legends, Status Quo, on their 2020 UK tour

ST: What’s one of the main hurdles grassroots artists face?

AB: They rarely have production budgets to suit their aspirations or they have trouble raising finance for a project. Songwriters can apply for finance via PRS For Music but it is very competitive.

ST: Any advice for emerging artists?

AB: I’d say get out there and get networking, go out and meet people. It’s good for everyone in ANS to have more musicians get involved, so we need to make local music artists aware that it’s open to all and for them to make use of it.

ST: The big question – when is The Brook reopening?

AB: We are open, and serving Thea’s unique vegan menu, and we’ll be seeing a return of Open Mic Nights at The Brook in the near future, just keep an eye on the website.